New initiatives are built for contractors with a passion for soccer

Makita U.S.A., Inc. is connecting with contractors who have a passion for soccer with an exclusive offer that gives fans free national team gear with select purchases of Makita tools, and one lucky winner will be heading to Brazil for the world’s largest sporting event.

It’s all part of Makita's continuing drive to bring the excitement of soccer to the growing number of fans on jobsites across the United States.

“The biggest event on the world’s soccer calendar is here, and it’s a huge point of focus for many Makita customers here in the U.S.,” said Raquel Portillo, Senior Marketing Specialist, Emerging Markets.

“Hispanic contractors are an integral part of the U.S. construction industry. We also know that they have a passion for soccer and many are loyal supporters of national teams including the Mexican National Team. These exciting soccer-focused promotions are a great opportunity to connect with the Hispanic contractor off the jobsite.”

“Ponte La Camiseta” Gives Soccer Fans Their “Team Colors”
“Ponte La Camiseta” (or “Wear Your Team Colors”) allows fans to choose a free national team t-shirt, training top, or jersey from top national teams competing this summer in Brazil. With a qualifying purchase of Makita power tools, contractors can select gear from 12 national teams including Mexico, United States, Honduras, and Costa Rica, as well as Argentina, Brazil, Colombia, England, Germany, Italy, Spain, and Uruguay. The mail-in promotion is based on qualifying purchases made through May 31, 2014, with a postmark date of June 13, 2014. Details: MakitaTools.com/PonteLaCamiseta

“Win a Week in Brazil” Offers Soccer Fan’s Dream Trip
Makita has teamed up with The Home Depot® and Coca-Cola®, all official sponsors of the Mexican National Soccer Team (Federación Mexicana de Fútbol, or “FMF”), to offer a chance to win an all-expense paid trip to Brazil this summer to watch Mexico in championship match play. In addition to the Grand Prize, fans can enter to win select Makita power tools and combo kits, as well as Home Depot Gift Cards and Coca-Cola products. “Win a Week in Brazil” is effective through May 12, 2014. Details: WinToBrazil.com or #WinToBrazil

“FMF Display” Brings the Energy of Soccer to the Point of Sale
Makita is bringing the energy of the Mexican National Soccer Team (FMF), one of the world’s top teams, to the point of sale. From June 1 through July 31, 2014, select Makita dealers will feature an eye-catching new display featuring FMF team graphics, select Makita power tools, and exclusive gifts-with-purchase including FMF tool bags, soccer balls, and team scarves. To find a participating Makita dealer, go to www.MakitaTools.com/FMF

Engaging the Hispanic Contractor On and Off the Jobsite
As the leader in product innovation, Makita engages Hispanic contractors on jobsites with best-in-class power tools. The new 2014 soccer-focused promotions are the latest in Makita’s ongoing engagement with Hispanic contractors through the sport of soccer. Makita is a sponsor of Major League Soccer (MLS), as well as the Mexican National Team (FMF) during their annual tour of the US. On MLS and FMF game days, Makita can frequently be found at the stadium meeting fans and sharing the very latest best-in-class power tool solutions. In addition, Makita’s “Build your Dreams” campaign focuses on the benefits realized by Hispanic contractors who use Makita power tools.

About Makita
Makita is a worldwide manufacturer of industrial power tools and offers a wide range of industrial accessories. Makita utilizes leading-edge technology and innovation to engineer tools that more compact with less weight yet deliver industrial power and results. Makita US.A., Inc. is located in La Mirada, Calif. and has a wide distribution network throughout the U.S. For more information, call 800/4 MAKITA or visit makitatools.com. Connect with Makita at facebook.com/MakitaToolsPage and twitter.com/MakitaTools 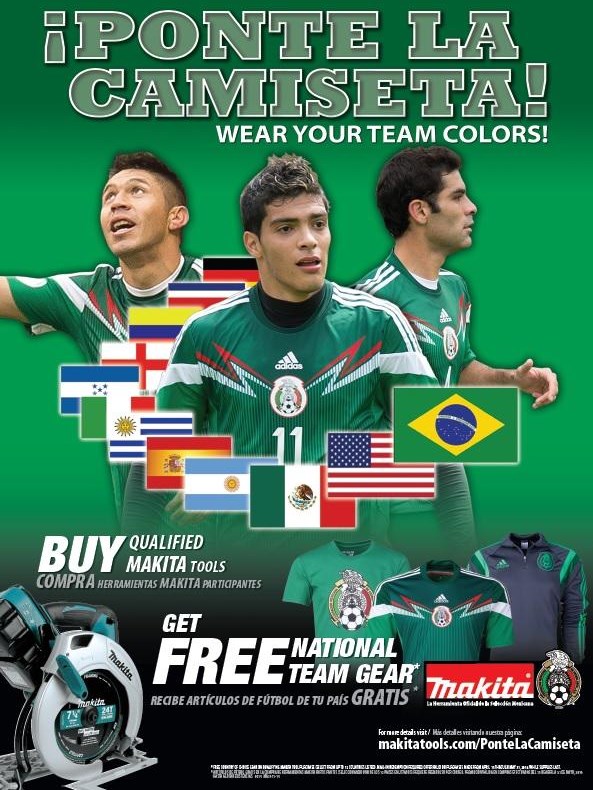 Makita's soccer-focused initiatives are built for contractors with a passion for soccer.

The Mexican National Soccer Team is consistently ranked as one of the top teams in the world.